Central Province is one of  Zambia’s ten provinces. The provincial capital is Kabwe, which is the home of the Mulungushi Rock of Authority. Central Province has an area of 110,450 km². It borders eight other provinces and has 12 districts. The total area of forest in the province is 9,095,566 ha (22,475,630 acres), and it has a national park and three game management areas.

As of 2017, Central Province had a population of 1,695,572, comprising 10.05% of the total Zambian population. The literacy rate stood at 70.90% against a national average of 70.2%. Bemba was the most spoken language with 31.80% speaking it, and Lala was the majority clan in the province, comprising 20.3% of the population. Central Province contains 20.64% of the total area of cultivated land in Zambia and contributes 23.85% of the total agricultural production in the country, with wheat being the major crop. 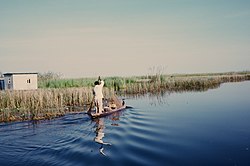 Central Province is considered the birthplace of the national movement of Zambia. The United National Independence Party (UNIP) was founded in Kabwe by Kenneth Kaunda, who later became the first President of Zambia and remained in office from 1964 to 1991. The provincial capital is Kabwe, home of the Mulungushi Rock of Authority. This is a historic site, an isolated flat-topped hill, wherein 1960, UNIP met for the first time, away from the eye of the colonial administration. It is still used for political gatherings, but the open air assemblies have been replaced by a conference center built nearby at Mulungushi University. The Mulungushi River gives its name to many historical policies, buildings and organizations. The 1968 Mulungushi Declaration proclaimed the country as a socialist nation. Mulungushi Hall in the capital is the venue for most international conventions.[3] The city of Kapiri Mposhi was a historic site during the post-colonial era fight against White minorities.

Central Province has an area of 110,450 km² and shares a border with eight other provinces. The total area of forest in the province is 9,095,566 ha (22,475,630 acres). The province has a national park and three game management areas. There are six districts in the province. The province has fertile soil conducive for the growth of cotton and maize. Lukanga Swamp has been identified by the International Monetary Fund as a potential place for a fishing industry. Precious metals are found in the Mkushi area, gold in Mumbwa, and coal in Kapiri Mposhi. Lukanga Swamp is a permanent swamp covering 1,850 km2 at the mouths and along the Lukanga and Kafue rivers. It contains many lagoons like Lake Chiposhye and Lake Suye. TAZARA, the Tanzania-Zambia railway line, has a major terminal in the city. It provides connectivity to the port in Tanzania from Zambia.

The provincial administration is set up purely for administrative purposes. The province is headed by a minister appointed by the President and there are ministries of the central government for each province. The administrative head of the province is the Permanent Secretary, appointed by the President. There is a Deputy Permanent Secretary, heads of government departments and civil servants at the provincial level. Central Province is divided into six districts:Chibombo District, Kabwe DIstrict, Kapiri Mposhi District, Mkushi District, Mumbwa District and Serenje District. All of the district headquarters are the same as the district names. There are six councils in the province, each of which is headed by an elected representative, called a councilor. Each councilor holds office for three years.The administrative staff of the council is selected based on the Local Government Service Commission from within or outside the district. The office of the provincial government is located in each of the district headquarters and has provincial local government officers and auditors. Each council is responsible for raising and collecting local taxes and the budgets of the council are audited and submitted every year after the annual budget. The elected members of the council do not draw salaries but are paid allowances from the council. Central Province is predominantly rural and hence there are no city or municipal councils. The government stipulates 63 different functions for the councils, with the majority of them being infrastructure management and local administration. Councils are mandated to maintain each of their community centers, zoos, local parks, drainage systems, playgrounds, cemeteries, caravan sites, libraries, museums and art galleries. They also work with specific government departments for helping in agriculture, conservation of natural resources, providing postal service, and establishing and maintaining hospitals, schools, and colleges. The councils prepare schemes that encourage community participation.

The total area of crops planted during 2014 in the province was 391,593.23 hectares, which constituted 20.64% of the total area cultivated in Zambia. The net production stood at 971,484 metric tonnes, which formed 23.85% of the total agricultural production in the country. Wheat was the major crop in the province with 99,758 metric tonnes, constituting 49.51% of the national output.The annual rate of inflation in the province as of August 2017 was 7.2% against a national rate of 6.3%, and the provincial contribution to the national inflation during the same period was 0.8.

For more details on this topic, see Wildlife of Zambia § Central Province.

Kafue National Park, the country’s largest national park, is shared with the Southern and North-Western Provinces.